If you have an original installation of Re-Volt, apply the patch 0916 or 1207.
Create a shortcut to the revolt.exe, right-click on it, go to Properties and append -sli to the path:
"C:\Program Files\Acclaim Entertainment\Re-Volt\re-volt.exe" -sli

Since you need the commandline to play, you might not be able to play via online services unless you can input the above commandline (it works on Re-Volt House).

A community patch that can be obtained here
Install the patch and you’re good to go.

RVGL is a modern port of the game for Windows and Linux and some mobile platforms. You will need an installation of Re-Volt.
You can find the patch here

Only if you're using Re-Volt 1.2:
These versions of windows are not shipping with legacy DirectX components. You'll need to install DirectPlay Legacy feature to play online on 8.1 onwards. You will be prompted to do so when you run the game.

The issue is fixed permamently in 1.2a15.0418 onwards. (commandline no longer required) If you installed 1.2a13820 or later: Create a shortcut to the revolt.exe, right-click on it, go to Properties and customize the path as follows: 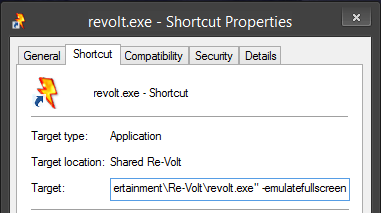 You can also use -window (all versions)