You might remember RV Frontend, the Wordpress blog we've had for ages. It's still there and posts are appearing every now and then; there just haven't been many things to write about lately. Another reason is the Discord server, which made the forums a lot more quiet. On that occasion, it's time to bring some activity outside of Discord.

There are quite a few people who drop by from time to time, though some never bothered joining the Discord server (fair enough, it can be very time consuming). The blog had a bit of a following, but Wordpress moved in a direction we weren't very fond of.

The old website, re-volt.me, was more or less intended to be the successor to RV Frontend. We moved many things over, including the tutorials. It went well for a year. We then decided to rename the whole thing to Re-Volt I/O. Since then, we've been working on a new and clean take on a Wiki for Re-Volt, and more recently even the tutorials for creating cars and tracks. Now it's time to reinstate the blog so that people can keep track of new publications and occurrences in the community, as well as leave a footprint of sorts. You'll be able to find it at re-volt.io.

The structure and frequency of these posts and videos may vary; however, the current plan is to post every Friday, or every second if there isn't a lot to talk about.

Alright, let's get straight to it!

One issue with Re-Volt Zone sure is the file size limit. However, this problem led to the temporary track page where currently two tracks reside. Both of them were made by DC.all, which he released this week. Both of the track require a recent version of RVGL. 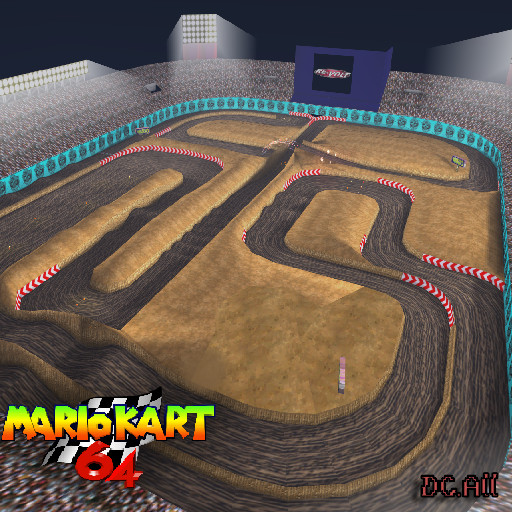 This, of course, is a port from Mario Kart 64. One big concern about ports is their implementation, the correct scale and the raceability in Re-Volt. The size has to be just right and the geometry has to be clean and solid enough for the cars to drive on.

We gave the track a test run. Without a doubt, we are deeply impressed! The race line and the setting of the track are nothing groundbreaking, but it integrates quite well into Re-Volt. The track is rather long (861 meters; Toys in the Hood 1 is the longest stock track with 747m). Going back to Mario Kart 64 in order to take a look at the original, we noticed that the karts in MK64 are actually slower than Rookies in Re-Volt. There is no problem with long tracks and the pacing here seems to be just perfect.
You can simply race — there is nothing in the way, nothing to annoy you. It would especially make for a very fair competition during online races. The AI also seems to be quite competent.

The geometry of the track is smooth. We didn't spin out unexpectedly even once. Landing jumps are also not a problem. If you try hard enough, you can get outside of the track, but it's easy enough to get back in. Getting stuck on the borders is possible. There is no glitching, and the physics seem to be very solid. The ground has a mud surface type assigned to it. It makes the cars drift more and it makes the floor slighty bumpy. It gives the track an authentic off-road feel while it's still perfectly playable without slowing you down.

Graphically, the track looks better than its N64 counterpart. The addition of particle effects and lighting is very fitting. One would expect something similar in Mario Kart 64, but there isn't. There are only a few things that are missing from a perfect conversion (not that it would matter, it's just what we've noticed). The WARIO signs are not rotating, which could be achieved with a custom object (a planet from Museum 2 or the helicopter from Toy World). The huge display which usually shows the player's screen shows the Re-Volt logo.

The music of the original track is present, which is great. There are no custom pick-up models or sound replacements (which in most cases is the cleaner approach); only the background noise from the crowd has been added. There is also a custom skybox.

We totally love the TVTIME cameras DC.all put in this track. It's often overlooked, but it certainly makes replays look really, really cool. The F3 camera also benefits from it. We're deeply impressed.

All in all, it's a very well made track. Very enjoyable to race on and carefully crafted. Definitely a keeper! 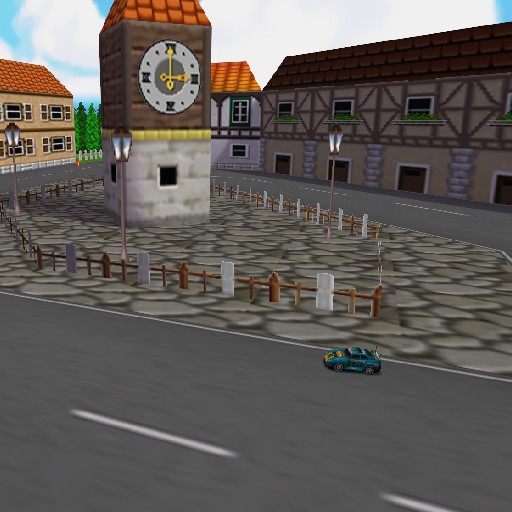 This track is a port from the game Penny Racers, a game we have not personally played. It's set in a harbour town close to a forest. The track is 670 meters, similar in length to Museum 1. It has a rather smooth raceline which may seem a bit narrow at times, but it's also very manageable with fast Pro cars. The size of the track seems to be just right.

The surface properties range from grass to bumpy cobblestones. The track is very convincing in that regard. Driving on it feels just like you would expect.

The AI doesn't seem to be doing very well compared to the other track. They drift a lot when taking turns. It's probably still a good challenge for online races since you can take some shortcuts and figure out a good ideal raceline.

In terms of graphics, the track looks alright, even though it's not exactly stunning either. However, a lot of work has been done to integrate it into the game. Shadow boxes correspond to the textures of the track, making its lighting very lively. The main problem is the texture quality, which the author is not to blame for. There are also a few textures that have transparency issues, one example being the walls in the harbour region. However, we're just nitpicking at this point; it's impressive to see track conversions from N64 games looking so nice.

Speed-ups are used in the track to emulate the speed pads of the original game. It sadly causes an overflow of particle effects, which also disables the reflections on the cars. Speed-ups weren't used in the original Re-Volt tracks at all, so there is currently no solid solution that works out of the box. They might have better been left out in this case.

The soundtrack from Penny Racers is there. It surely fits the track very well. There is also a custom skybox and some environment sounds which make the scenery more lively.

All things considered, this track is a good example for track conversions. Together with Wario Stadium, it shows how well tracks from other games work in Re-Volt and how well they can be adapted.